It was great; then it wasn’t.

I have mixed feelings about On Writing Well by William Zinsser. I love the first 94 pages, but the rest far less so. That’s a 28 percent good book, and that makes my final three-star ratings more than generous.

What Zinsser writes in the first 94 pages caters to a level of practicality and emotional value that makes those pages worth more than any other 94 pages in the book. His words sink deep while other writing books skip on the surface. He gives a qualitative view on what counts as clutter, what counts as style, and that it’s up to the writer to make these decisions. There are more exceptions than absolutes, and we shouldn’t bind to what a strict English teacher told us. We shouldn’t be scared of writing. I love writing regardless of my experiences in school, and with that love, I too have been equally scared.

It’s refreshing to have someone who has worked in newspapers, magazines, and teaching–at the prestigious Yale and smaller, community institutions–to tell you that as long as you work hard and know your basics you have every reason to be confident. He has a great voice, and I can see myself reading those 94 pages again as a refresher and a pep talk in a few years. 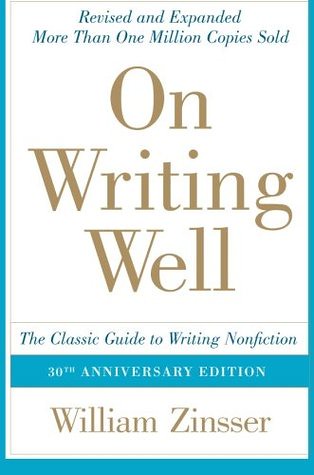 However, the rest of the book is either common sense (or is that just me?) or biased based on personality and background. I don’t blame him for this. The book was never designed to be objective or his comforting voice wouldn’t resonate, or his vivid vocabulary wouldn’t have forced me to keep the dictionary with me while I read.

Between my meager background in science communications and my personality, much of Zinsser’s advice has noticeable flaws. The degree of emphasis on “humanity”–how emotional and sensual humanity is–he worded like an absolute. It’s the correct way to write. But it’s merely a preference–though the persuasive kind that is often marketable and employed by public relations writers. However, he reiterates throughout the book how much your writing needs to be you and you have to write for yourself. You don’t write for an editor or the assumed marketable audience. You.

Given how many times in the first 94 pages Zinsser mentions individuality and every writer needs to approach a story differently–not to mention his broad experience–I’m surprised that he narrows his perspective in the rest of the book. He doesn’t grasp how variant personalities and world views are.

Many don’t share his worldview. While an article or a book automatically has some humanity because a human wrote it–especially if the writer keeps their voice–there’s no obligation to be sensual. A lot of people just aren’t expressive in that way and trying would feel and sound fake.

An intelligent article in itself also appeals to nonfiction.

Many history enthusiasts love the facts and a narrative that gives flow to the facts like the book is embodied with its own personality. Science books may never feature a human. They may have a cast of dedicated, knowledge-driven scientists. There may be no drama to elicit deep emotions in a reader that is readily swayed. But there is an audience for the purely informative style of presentation and they love it.

Essentially, feeling-oriented writers seem to dominate the literature world. They make it their world. However, thinking-oriented writers have the thinking-oriented readership the other writers estrange. To these readers sensual writing is, to borrow the most frequent quote, “That’s B.S.” But an orchestration of logos, information that offers a new perspective, and a dose of a writer’s reasonable personality win them. They want something that is either exclusively practical or something that’s intellectually enlightening. They aren’t even uncommon; just understated.

I found the first 94 pages to be wholesome, but the rest was conceptually incomplete. The rest easily weighs more literally, but I can respect each page for what was written on it and even see the two sections as different books not to be tainted by my opinion of the other. Thus I stand on neutral opinion grounds…that tremor with controversy.

On a side note–made out of mild mockery and technical nitpicking–, contrary to the chapter about science and technology, chimpanzees are not “down a rung on the ladder” to humans. That would be all the primates, mice, fish, and bacteria from bygone eras. Chimps have their own ladder. They also have a meme for this misconception and thus I find it humorous enough to mention.