Africa is full of jungle and safari stereotypes, but this series largely avoided those. Little visibly survives in the Kalahari so the film crew had to carefully plan their visit and wait for rare events such as rain, and perhaps in the meanwhile was when they captured invertebrate behaviors–requiring another kind of planning: advanced, timely camera placement. The savanna had the worst drought since 1961, so that episode included the worst survival conditions the ecosystem had to offer but also the crew waited until it finally did rain. The series took four years to complete. 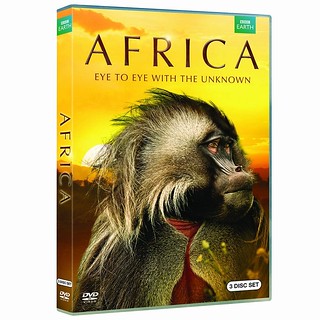 Attenborough appeared at the end of a few episodes, but he starred in the sixth. He interviewed villagers that managed the mountain gorilla population–had to–because their town surrounds the mountain the gorillas live on. There is a Maasai that tracks lions with conservationists and instructs his people to migrate ahead of pride and so avoid conflict. Many elephants had to abandon a national park due to drought, but the farmland bound the park, so officials built a highway underpass–within 24 hours the elephants were using it.

My most memorable scene is an unfortunate one. It truly translates how real it is for an elephant to survive drought. Sand blew and a herd of females migrates in search of food. They were all weak and even on another episode, some conservationists got together to pull a grown female out of the mud. However, one of the young couldn’t get up. It had collapsed from exhaustion and the herd had to keep moving. The mother stayed and nuzzled it until it died. The mother stayed, pacing and circling at first. I wondered if she would refuse to move on with the others, but she eventually left. I don’t remember feeling so emotionally drained while watching a natural history documentary. Usually, deaths are quick. This one drug on, and of course elephants are known for their deeper emotional capacity and understanding of death. With elephants you don’t just watch the end of life, you also watch the mourning.

I appreciate how all-encompassing the series tried to be. Inherently all of Africa’s wildness can’t be fully grasped on TV, but this Africa integrated a respectable amount, and wielded unique events, and narrated the broader context in an artful manner that held my interest.