It was not a hard decision to ditch the cable and get my audiovisual entertainment exclusively from the internet. I was always at odds with the TV because no matter the provider, no matter the channel, I rarely found what I wanted to watch. Sometimes The History Channel would have something other than Christian and World War II history. Sometimes. Sometimes…shoot, most educational channels have largely ditched their documentaries, so most of the channels I once watched I no longer bothered with.

Then came Netflix. Those scarce documentaries I wanted to see but never caught? I find them, and much more, so easy now.

Recently the site added Mile…Mile & a Half, a documentary of hikers on the 211-mile, 25-day John Muir Trail in the Sierra Nevadas, done by those hikers. I would love to go backpacking one day, so I don’t mind arm-chair traveling for now (though I technically sit in an average computer chair). 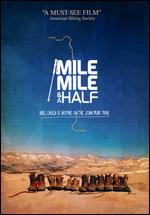 It was educational for me as a budding photographer and hiker. The mostly four-member group includes a sound technician, a still photographer, and two videographers. They are a playful, but reflective bunch. When I stop on a hiking trail to identify and photograph a plant, I spoil the hike for whoever came with me. When a bunch of artists goes on a journey, they stop at the same fascinating sights and sounds.

The sound guy, Durand, I consider the most entertaining. Although the whole group is laid back and colorful, Durand is the most childlike. The year the journey took place the Sierras have 200% more than normal snowfall, so even during the summer, Durand had frogs to “rescue” from the snow and place on the earthen ground. Why just slide down a steep snow slope when you can hike to the very top and then slide down? I completely understand his frustration when trying to record wildlife sounds. It takes him 15 minutes to get his equipment ready, by which time the frogs stop croaking. He repacks his equipment and the frogs start croaking again—and resulted in the only bleeped curse word in the documentary.

In so many ways their story resembles a regular adventure novel. They start as a group of five, but one guide had a hard time keeping up and didn’t want to burden the others, so he turned back. Later the group meets a couple from Dolores, Col. (woot! Coloradoans not from the Front Range i.e. where most of the rich people move in from other states). They join up for the rest of the journey. Briefly, they meet “these kids” by a lake with an over-fascinating black box. “These kids” are brother and sister, 23 and 17, bonding with the oil paints in the backcountry. I would love to have that relationship with my older brother. Another group offers Durand the sound he’s been waiting for, as they play instruments that sound uncannily like the soundtrack to the whole documentary. Finally, they meet a Japanese woman doing the entire trial by herself, but she also joins the now-large group and completes the journey at Mount Whitney. Just throw in some danger and you have a good adventure novel formula.

The stuff of dreams.

One thought on “Film Reflection: Mile…Mile & a Half by The Muir Project”