Originally published as a digital essay for a university course April 22, 2020.

Human society traded one brand of disease outbreaks for another. In the past, we lacked hygiene, medical infrastructure, and knowledge of what causes disease. Today, we’re better in all three categories, especially in developed countries, but we’re disturbing ecology more and more, causing more spillover events. We easily handle familiar spillover diseases like rabies and plague but struggle to prevent and respond to emerging diseases.

Dense cities, habitat destruction, and concentrated animal farming all contribute to spillover. They force animals, members of the same species and different species, to live closer together. Damaged habitat also simplifies natural relationships and amplifies their effects. The traffic of viruses goes from the slow exchange of a county road to that of an interstate highway. Speaking of highways, diseases can only travel as far as a host can travel, making the ancient world of foot traffic seem safe compared to modern same-day international flights.

“We invade tropical forests and other wild landscapes, which harbor so many species of animals and plants—and within those creatures, so many unknown viruses.”

David Quammen, author of Spillover: Animal Infections and the Next Pandemic, wrote in the New York Times 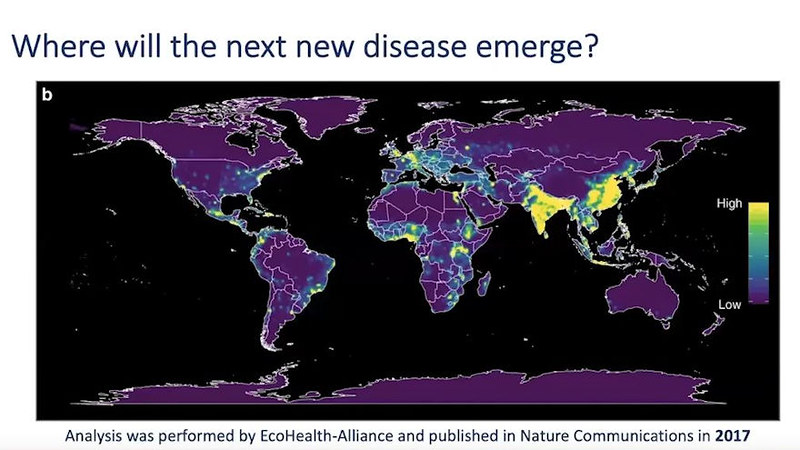 Justin Meyer, biologist of University of California San Diego, used this risk map in a public seminar on YouTube.

Habitat destruction forces wild animals to travel farther and nest, feed, and defecate on farms and urban areas instead of insulated, wild areas. Hunters and meat marketers also transport wild animals out of their native area to an urban market in another region where many species that normally wouldn’t meet, do meet. They also meet more humans. Africa faces similar problems, though to a smaller degree. Additionally, both regions have bats that scientists have tied to outbreaks.

Bats share many viruses that cause deadly outbreaks. In 1967, the Marburgvirus first broke out in Marburg, Germany, and traced to imported Ugandan monkeys. In 1976, the Ebolavirus first erupted in Nzara, South Sudan, but scientists first reported the outbreak in villages near the Ebola River, the Democratic Republic of the Congo. In 1994, the Hendra virus killed horses and later humans around Hendra, Australia. In 1998, the Nipah virus broke out in several Asian countries, but first around Nipah, Malaysia, on pig farms. In 2002, SARS coronavirus had its first outbreak in Foshan, China. In 2012, the MERS coronavirus showed up in Saudi Arabia. All of these viruses continue to break out periodically. The last but perhaps already the most notorious, SARS coronavirus-2 of Wuhan, China, started in 2019. Besides these epidemics and pandemics, bats also carry many of the same disease-causing viruses rats do. “Rats with wings” is an apt joke. 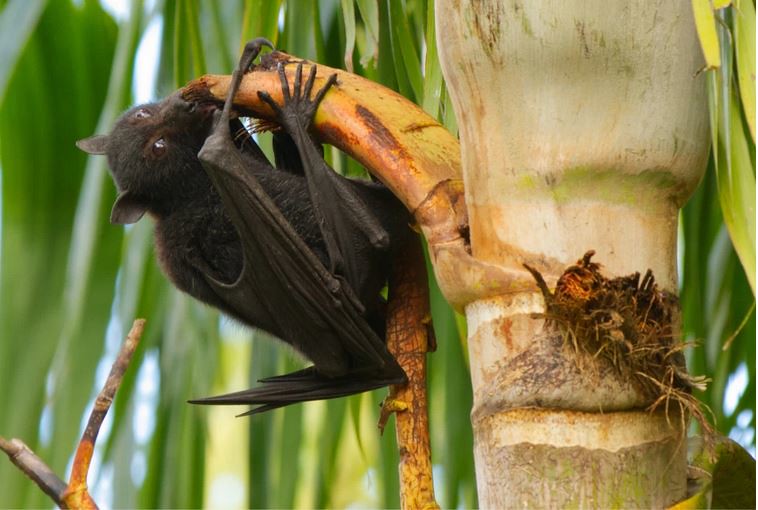 Bat, rat, or otherwise, the denser the human and domestic animal population and the more ecologically disturbed an area, the greater the risk of spillover. Besides southern Asia and central Africa, other emerging economies like Brazil have high risks. Further, MERS coronavirus testifies that even familiar animals in stable environments sprout a rare, but costly, spillover.

“We cut the trees; we kill the animals or cage them and send them to markets. We disrupt ecosystems, and we shake viruses loose from their natural hosts. When that happens, they need a new host. Often, we are it.”

David Quammen, author of Spillover: Animal Infections and the Next Pandemic, wrote in the New York Times

Popular science writers like David Quammen and ecologists have taught about the increasing risk and severity of pandemics for decades. A lot like J. S. Koen, the veterinarian who first suggested animals and humans shared diseases, an ecologist’s educated opinion can be unpopular.