There’s a phenomenon science students experience. Perhaps there’s an inspirational, rare term assigned to it though I do not know what that would be. The landscape is no longer a cohesive environment of greenery and blotchy earth colors punctured by charismatic creatures and dramatic waterfalls. It…becomes millions of things that non-sciency friends rare their eyebrows at.

I’ve used Unearthed Comic’s illustration in the past and I’ll probably use it again, but this time around I’ll point out The Biologist’s Garden’s post, which compares a scenery seen by a civilian versus the same scenery seen by a biologist–amateur or professional.

Beyond that, here’s the alternate version of my Lake Fort Smith hike: the Wandering Eye and Fine-Tuning Mind a.k.a. scientist version.

Sometimes seeing the details of the landscape means seeing smaller flowers (especially in the spring), less colorful flowers, more stealthy critters, dead tissue, fungi, or simply being able to name things adds detail to your mental and physical view of the world. Often this is from the class of Insecta and should not be underestimated–they practically rule the world and we’re ignorant subjects.

However, to be specific to Lake Fort Smith around midday and midsummer, there’s a lot of a very distracting kingdom of residents….By this I mean what I’ve heard professors and graduate students say one should never take a mycologist on a hike for they will forever be distracted by discovery.

So clearly I went on an hour or so hike and my eyes flew from one thing–ahem, fungi–to another. It happens. My favorite statement to share with whoever is hiking with me is, “I was distracted by nature!”

But there is one other element to the scientist’s view of the outdoors. To show that I will bring back a photo of a creek landscape from part I: 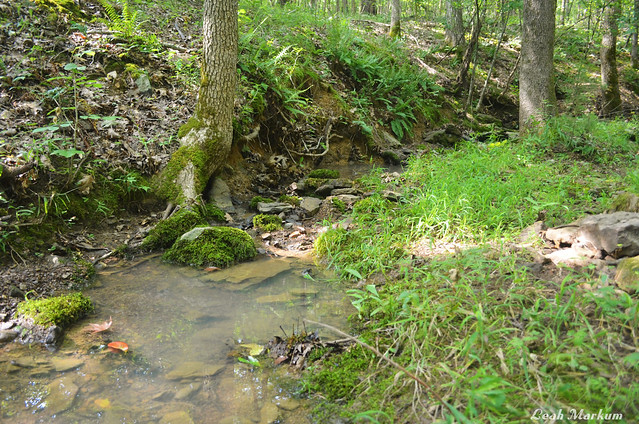 Essentially your brain runs on questions, trivia, and connecting ideas while being astounded by how amazing it all is–the big picture and what’s immediately in front of you. One of my ecology professors kept calling it, “reading the landscape.” Kind of scientific and yet mystical.