The American chestnut tree, Castanea dentata, was one of the first biological icons to be virtually vacated from an integral position in both the environment and American society. We knew little about accidental imports of exotic species, and the introduction of the fungus Cryphonectria parasitica spurred the discussion and action.

I was fascinated with the topic when I took botany and ecology courses at my university. My professor grew up in the Appalachians and received his degrees at schools in Virginia. He loved using examples from his motherland. Thus, when disturbance ecology and invasive species came up, the American chestnut was a popular example.

The pathogenic fungus killed all of the trees that once had roughly 33 percent dominance in the Appalachian and neighboring region’s canopies. Bushy rebirths occasionally emerge from the adult tree’s root system, but the rebirths eventually die. The species holds an ecological stalemate, though at a disadvantage. Wildlife had to adapt to the lack of the chestnut’s exuberant mast–the forest floor could be buried in nuts.

Mountain villagers could no longer subsist winters on the fruit nor sell for supplemental income. No more memories of the family going out “chestnutting.” No more all-purpose logging, where the tree can be a cradle, a casket, or a telephone pole, each of which granted the necessary income for people to live in such remote areas. (“Hillbillies” had to move away for work and we so ostracized by a society that thousands of mountain people had forceful operations to “fix” their reproductive tracks so their behaviors couldn’t be inherited.) All because of a microscopic hitchhiker on an import of Japanese chestnuts, the latter of which evolved with the former and had a health resistance.

Basically, that’s what I knew. That and the disease was first recognized at what is now the Bronx Zoo what was then the early 1900s. When I spotted American Chestnut: The Life, Death, and Rebirth of a Perfect Tree by Susan Freinkel by accident when I was searching for a soil science book in the library I had to take it. My brain wanted an elaboration on the chestnut’s story. More interestingly, what has been happening since the tree’s near-demise? 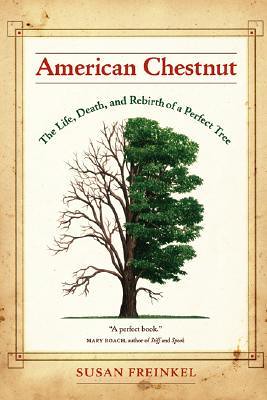 Freinkel recorded input from elderly villagers that grew up in remote nooks in the Appalachians who had stories from their elders who witnessed the crest and trough of the chestnut’s coexistence with European Americans. She spoke with plant pathologists that were studying different strains of the virus and how to inoculate trees with hypovirulent strains (to subtle effect). Some researchers seek to crossbreed American chestnuts with their resistant Japanese cousins one generation and keep the rest of the generations American to emphasize American traits like straightness of the trunk, height, and tasty produce. Bioengineers are trying to take leaf and embryo samples, leave them in media with potential resistance genes and nurture the result into a tree (turns out poplars are easy with these techniques but chestnuts are uncooperative).

Some adult trees survived the blight, but they are isolated and often outside the natural range. Appalachian human emigrants have planted the trees on farms in Wisconsin and Minnesota. Some have been discovered in Vermont and North Carolina. Most likely they got lucky the blight didn’t blow in their direction.

As Freinkel addresses toward the end of some chapters, caring for endangered species that have shorter life spans like most animals and many herbaceous plants, trees require a phenomenal amount of long-term effort: generations of humans just to get up to pace, let alone maintain.

Efforts focus on two schools of botanical rescue: weakening the fungus, strengthening the tree. The first few chapters of the book tell the history of the conflict, almost the rest of the book has a chapter dedicated to a different approach and the last chapter addresses how these efforts might conclude or change in the future (as none of them are viable at present, 2007 in the book). Even if we nurture healthy, blight-resistant American chestnuts, the forest has long forgotten and evolved without it. Can the new trees compete with the oak and hickory dominant forests? Can the new trees resist any new (or even old) diseases and pests that may come their way?

The read satisfied my craving for the bigger story. Clearly, more story has yet to written and read.