Likely the biggest decision I made this year, as superficial as it may sound, is join Goodreads—yes, a social media site. How did I let myself fall into the bottomless pit of neurotic status updates?

Because books are cool. Duh.

A function of Goodreads I take advantage of is the group. I joined a group representing each of the genres I most frequently read.  One that recently rebooted reads a member-elected natural history book every month. In October (and for me, the last days of November after I finished NaNoWriMo and had until the 2nd of December to return because I used my renew allowance) that book was Voyage of the Turtle: In Pursuit of the World’s Last Dinosaur by Carl Safina.

Carl Safina did a good job on focusing on a travelogue narrative pumped with scientific details on not just the subjects of the book, the leatherbacks, but other sea turtles and organisms related to their livelihood. He traveled to various sites along the Atlantic and Pacific where leatherbacks are known to aggregate for feeding and nesting. He consulted scientists, conservationists, and fisherman and let them speak for themselves. The only sensationalizing here were interjections of poetic scenery description. I appreciate that. 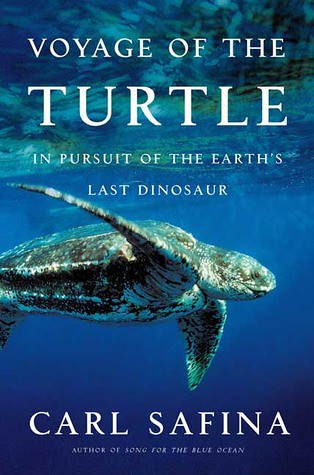 My favorite chapters were set in Nova Scotia, one of my favorite provinces in Canada. In one chapter Safina joined a small crew of sword-fisherman that worked using old-fashioned spears instead of long lining. Through this chapter I got to “listen” to rustic talk of past adventures and common sense perspectives that reeled me in like a little kid yet to have an opportunity to see the world and thus lived through those who had. Leatherbacks and swordfish, which are the intended catch in the same long lines the turtles get trapped in, weren’t necessarily relevant to the topic. I was immersed in the culture, the ways of folks who lived among the elements.

The best story about the leatherbacks I heard through Mike James of Dalhousie University. He told Safina about how when he was a new graduate student wanting to study leatherback, everyone thought he was crazy—no one believed the turtles came that far north. James said:

Within days he received calls and photos of sightings. Apparently the rest of society never asked the fishermen what was out there. That season James had 200 sightings.

Another time James was at Neil’s Harbor in Cape Breton with a net fit for the large turtles on top of his car. He was finding volunteers to help him catch the animals. Who thought he was crazy? The people who did help him didn’t agree to until after they stopped laughing and the police officer, well, Safina said it best:

The policeman took one look at that huge net on his roof and concluded the obvious: Mike was a nut.  But insanity is both legal and a defense, so Mike eluded arrest.

Voyage of the Turtle had a wonderful narrative with great human characters. In addition, one does not have to be naïve to believe that the fisherman care about the turtles, too. Sometimes people only care about the bottom line, but many of the fishermen do their best to avoid harming turtles without forcing themselves into destitution. Commercial fishing easily loses more money than it earns. If a government official boards your ship even just for an hour it often means you lose a day’s worth of income—this is huge when your catch is dependent on many environmental conditions aligning in your favor.

One more thing worth mentioning about fisherman: many used to save turtles before the law required them to have no evidence of turtles on their deck. In the past they would draw in the lines or nets, untangle the turtles, and let them rest on deck until they caught their breath. Now fishermen must toss the turtles overboard immediately because laws are enforced based on what’s on deck. The turtles don’t catch their breath and many drawn from there. The fishermen used to have the choice of income and save what they could, but now must choose one or the other. That’s an unfortunate execution flaw in a policy that had the intention of saving turtles.

To think: if strangers on Goodreads hadn’t nominated and voted for this book, I probably wouldn’t get around to reading it.

2 thoughts on “Book Reflection: Voyage of the Turtle by Carl Safina (Part I: Human Dimensions)”