Caution: “Folks, This Ain’t Normal” is a thought-provoker. If you are not intellectually qualified to discern fact from ideology and integrate that information into your brain without barfing it out because it challenges conceptions made from incomplete knowledge or pre-existing ideological leanings, you will likely flounder in this book.

This is a playful way of saying this book requires open-mindedness as it does not adhere to any polarized popular belief on food systems but comes from a custom molding.

The short of it: Joel Salatin owns and runs Polyface Farm in Shenandoah Valley, Va. that is open to visitors. This farm is full-service, small-time, and 100 percent locally-based.

He shares his experiences and sustainability philosophies born from those examples, comparing the hows and whys of modern agriculture and the hows and whys of traditional agriculture, and some clever ideas to capitalize on the best of our options in a healthy, ecological and economic manner. However, a reader will tussle with agreeing with the common sense parts, being impressed with some of the ideas, revulsion from other (and non-agricultural) ideas, and aggravation from outlandish realities that for some reason people don’t normally talk about—perhaps, as some communications professors joke about, the topics are not “sexy” enough.

“Eggmobile and flock of chickens at Polyface Farm” by Jessica Reeder. Salatin calls the housing the egg mobile because he rotates the chickens just like the pigs and cattle from pasture to pasture–but the chickens get to ride their transition.

Salatin likes to step on toes. He doesn’t write with a “my way or the highway” attitude, but he does expect those who pick up the book to contemplate the things we prefer to let others—even strangers—think about and act upon. It’s okay. It’s a book. It can’t kill you. We can only learn if we challenge our existing ideas.

The book is good at debunking popular notions. Some people say no to GMOs (genetically modified organisms) but hail organics like it’s the solution to all of our food problems. It’s not. It’s a small facet. Organic food can be grown like any other industrial food save for whatever parameters the government’s policy states (the official label is owned by the Department of Agriculture). They won’t be GMOs and won’t have the same levels of pesticide residue, but there’s nothing that says they won’t come from massive monocultures plagued by dead soil and further soil and water resource depletion. They can still use substantial oil by trafficking products to the far corners of the country for processing and to another corner for the market. Not particularly sustainable.

However, growing, processing, and marketing the food items all in a single region mitigate many of those secondary issues, organic or not. It’s also worth mentioning that labels require hefty fees for each individual product to the government for licensing—fees that your small-scale organic farmer cannot pay for. 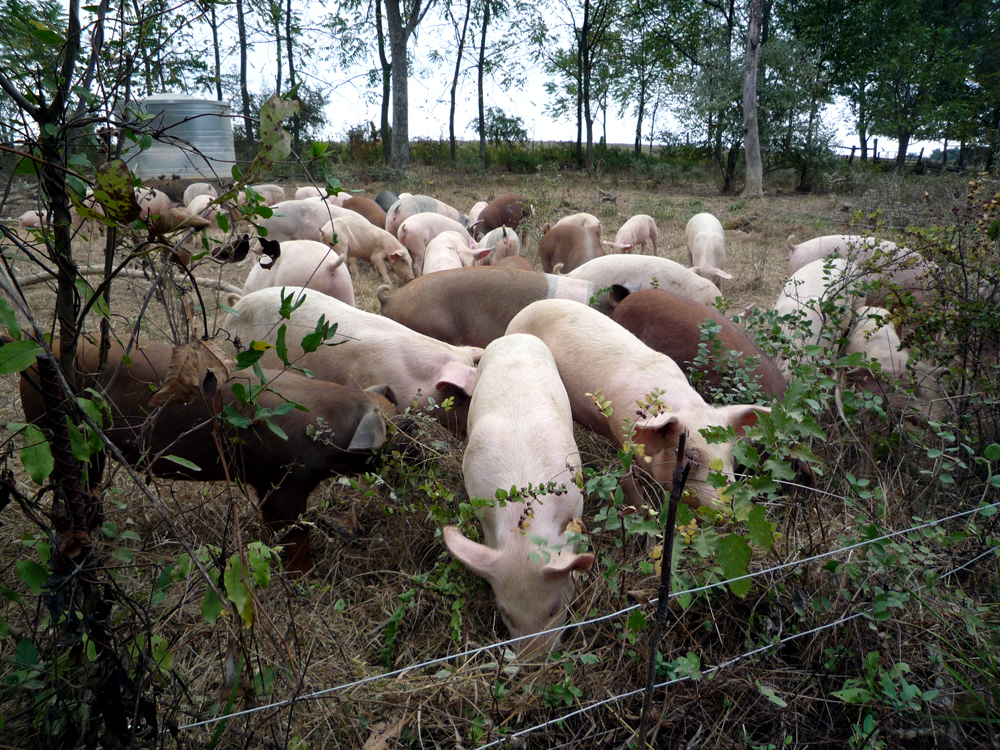 “Pigs at Polyface Farm” by Jessica Reeder. Pigs are ecological soil aerators and Salatin has them do the same as their wild cousins. He has them live in pastures that are too dense for cattle. Plants grow better with an occasional disturbance to allow more air into the soil (and free space for seedlings).

Something particularly hilarious (in an aren’t-our-brains-half-baked kind of way) is Salatin doesn’t vaccinate. He’s not against vaccination, but he simply hasn’t needed to save for three occasions. Each time he determined the source of the illness and eradicated the source. For example, his cattle got blackleg. The extension service told him to vaccinate, but your everyday veterinary manual said it’s caused by anaerobic wounds…he had allowed his cattle to graze in the brambles. The next day, he brush-hogged all the brambles, waited for the hoof wounds to heal, and never had that issue again.

He and farmers of the past can get away with this because they have proper living conditions for the animals. They aren’t overcrowded, they exercise and graze. They aren’t stressed. Disease prevention 101. Vaccines become necessary when we live closer together, have poor ventilation, and don’t exercise and strengthen our bodies (by we I mean this applies to animals including humans).

Sometimes it takes an old man and an old-fashioned printed text to remind us to do our own research and not be a part of the crowd.

2 thoughts on “Book Reflection: Folks, This Ain’t Normal by Joel Salatin (Part I)”